After winning the competition to produce a nice image from the HOYS data taken as part of the HOYS-LCO project, I was rewarded with one hour of time on the network of 1m LCO telescopes. I wanted to choose a target that was interesting to me, and choosing something pretty wasn’t as important.

My first target was the twin quasar in Ursa Major. I chose this one because there are some interesting things about it. It was the first object to be identified as being a result of gravitational lensing. Because of the galaxy cluster between Earth and the quasar, the light is bent around due to the warping of space-time, (as predicted by Einstein) and we end up seeing two images of the same object. The two images appear roughly six arcseconds apart in the sky, and measurements in the changes in brightness have given a time lag between the two images of around 415 days. Unfortunately, the location of this object meant only one LCO telescope was available to take the image, and this scope was being taken up by other projects which took priority, and so after a few failed attempts, I made the decision to move onto a new target.

My next target was the galaxy PGC 54559, a small, 16th magnitude galaxy in Serpens. It lies around 610 million lightyears away. Because of its small size, even in the largest scopes under dark skies, it is mostly unremarkable. So why this one? It has another name, going by Hoag’s Object. It is named after Arthur Hoag who found it in the 1950s and described it as peculiar. The structure of this galaxy is what makes it unique. It has an almost perfect ring of young, hot, blue stars, then almost a gap before an older, yellow nucleus. This makes it a very unique ring shape and was the first of its kind discovered. Since then, a lot of galaxies have been found that classify as a ring galaxy, but none quite as striking as this. There may well be some very faint gasses or star clusters in the void between, but these are too faint to be seen.

To demonstrate the rarity of this object, a 2017 study found a total of nearly 4,000 galaxies that can be classified as a ring galaxy, but less than 40 displayed the classic void with a well defined separation of the ring of young stars around an older nucleus. There are a few theories about how this structure was formed, from a progression of a spiral galaxy, to colliding galaxies, but nothing definitive has been found yet, as far as I am aware. I found this to be a very fascinating object, hence the reason for choosing it as my target. As these are scientific scopes, and the priority isn’t pretty images, I was hoping at the very least to be able to see the ring defined nicely with the nucleus, and the image I ended up with is here: 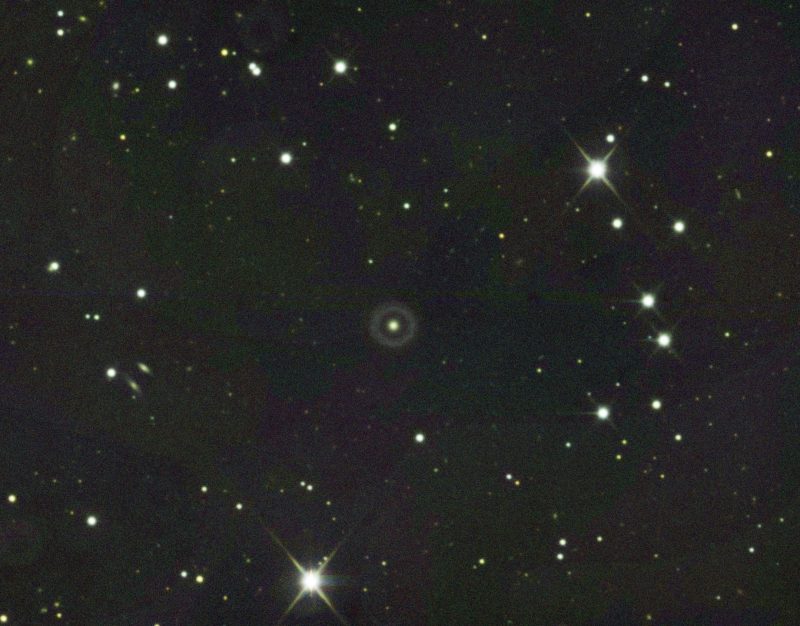 Zoom into the centre of the field of Hoag’s Object. The image is a colour composite of the stacked B, V, and R sub-frames with 18min exposure time in each. North is at the top and East to the left. The size is approximately 14’x11′.

I am quite happy with this. The structure is clearly defined, with the ring and nucleus on display. Setting up the observations and processing the data for this object was difficult. Because it was so faint, I had to make a decision between longer exposures, or more exposures. I settled on three images with 6 minutes exposure time in each filter (B, V, R). I needed the time to pick out as much detail as possible. The images were still rather noisy as the observing conditions were not perfect and not many images had been taken due to the one hour limit. I also struggled a lot with background gradients which are evident in the final picture and the noise was quite noticeable. However, I did the best I could, and using a program like Astro Pixel Processor was helpful in trying to neutralise the background before the main processing started, although it was only able to help a small amount. Because of this, stretching of the data had to be done gradually. Because the target is so small, the picture needed cropping, which only made the noise more noticeable.

If I had the chance to image this again, I would definitely like to have a minimum of 2-3 hours per filter, to enable longer exposures and more of them. This would make the data much easier to work with. Overall, I really enjoyed the experience and it was fun trying to overcome the processing challenges, learning to use new software and using new techniques to get the most out of the data. I’ve had a great time being involved in the HOYS project, and am very grateful for the opportunity to have some time on this scope to image objects that my scope wouldn’t be able to resolve!