Some answers to your questions

How can I automate the image processing?

On of our contributors came up with a way of automating the processing for a One Shot Colour CMOS camera using SiriL and scripts.

How can I make my HOYS data more accurate?

“If we consider only one system, then keeping everything constant is the most important choice for lightcurve accuracy. Any change will hurt, partly due to the non-linearity of the chip, but also due to nasty secondary effects for example colour dependence in extinction. Unfortunately some things won’t stay constant, particularly the weather. And with heterogenuous lightcurves from lots of systems we don’t have a choice, we have to take out most of this in processing, as much as possible. But with one single system lightcurve precision of 0.01 mag is very realistic over the course of a few days or weeks.” AS

“If you know your detector well, I would avoid having any interesting stars in the range beyond linearity, which is worth finding out (and an interesting exercise). We usually. need an ensemble of stars, so, you can’t optimise for one star. But you can avoid the worst ranges of the chip and set the exposure time accordingly. Excellent tracking and autoguiding is a good idea – don’t dither and avoid drift, keep the stars on the same spot of the detector.” AS

“Good calibration frames are vital. Darks and Bias frames – simply take a large number of those and median average them. The most import are the flatfields. Taking good flatfields is difficult. But if they have gradients in them (from the sky itself, esp. if you have a large field of view) then this will introduce noise we currently cannot correct for, even in the post processing. Make sure you have up to date flatfields as well as things change over time. Make sure your flatfields are flat. If you have two sets then divide them by each other. If you get systematic differences if the result that are not 1.00 then you don’t have a good flatfield! A value of 1.01 or 0.99 mean you are causing 1% errors in the photometry.” DF

“Magnitude ranges: Most of our data typically has stars brighter than 10mag saturated. Most images then range down to between 16 or 18mag. This works quite well for the targets and science we are doing. We are interested in getting light curves for as many young stars in the target regions. Most regions are closer than 3000 light years, Typically a bit closer. Stars with Solar luminosity at 3000 light years distance are about 15 mag. So our typical data generates good light curves for stars in those clusters that are up to 100 times as bright as then Sun, and we also get good detection of stars with as low as 10% of the solar luminosity. That covers almost anything there is. Yes on the faint end we miss the very low mass stars, but we knew this from the start. On the bright end: Massive stars that bright are quite rare hence we only miss a few objects – but yes, they are interesting.” DF

“Exposure times: As a rule of thumb: A 40cm telescope with standard CCD/CMOS/DSLR will typically saturate a 10mag star in 2min if your seeing is about 3arcsec and you have 1arcsec pixels. It is actually quite difficult not to saturate star brighter than 8-9mag with such a large telescope. Our calibration procedure will show you which range of magnitudes the stars in your images have. You can then adjust exposure times if needed. The calibration automatically flags up stars that are saturated or in the non-linear regime. Such measurements can then be easily excluded from any analysis.” DF

“Consistency is everything… Simply not changing anything (other than up to date calibration frames) for years is the key. We can then extract such subsets of data and improve the calibration. Thus, if you have limited observing time (as we all have), it is generally a good idea to stick to the same target (and multiple filters) to build up a good subset of data – this is what we aim to do with the LCO sub-project.” DF

“Accuracy: Our detailed analysis of some example stars (e.g. V1490Cyg, V1598Cyg) shows that our post-processing and calibration results in typical uncertainties of a few percent (0.02-0.05mag) for stars of roughly 15-16mag. This is good enough to analyse outbursts, typical eclipses by binary companies or disk material, and rotation periods. For brighter stars the noise is of course typically lower.” DF

How can I tell if a star might have an accretion disk? 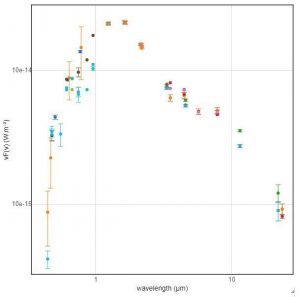 Look at the star in Vizier to see the Spectral Energy Distribution (SED) of the continuum. The spectrum of all stars is approximately a black body (see https://lco.global/spacebook/light/black-body-radiation/). The shape of the spectrum is the same, it just shifts to longer wavelengths for cooler stars and bluer wavelengths for hotter stars. The accretion disks around young stars also approximately emit black body radiation. But the disks are much cooler. Thus, the combined spectrum of star and disk has two humps – and we call the hump from the disk infrared excess, as it is additional emission at infrared wavelengths compared to just seeing the central star.

This example curve shows an extra hump to the right / longer infrared wavelengths. 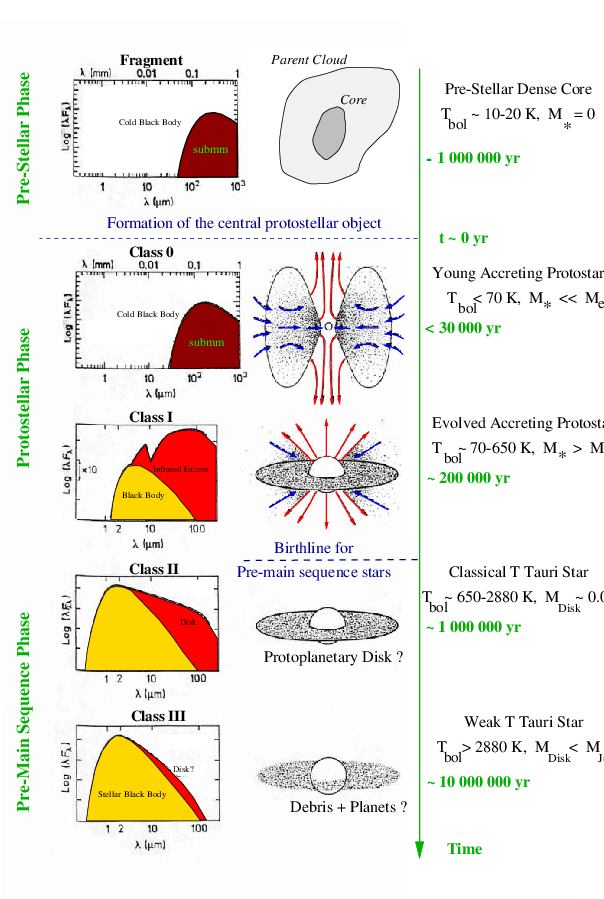 How do I find stars that might have interesting lightcurves?

The video about Analysing Lightcurves on the LCO Instructions page shows you how to search the SIMBAD database for for young stellar objects that might be variable.

Screenshots are on the video.

Simply – how do stars and planets form? 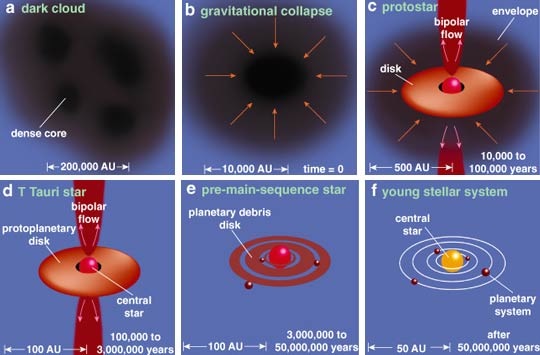 What camera can I use?

Cameras that you normally use for astro-imaging are useful. These include astronomical CCD and CMOS cameras as well as DSLRs. Mono (B&W) cameras allow you to use more specific filters. Colour cameras have an RGB filter grid in front of the mono sensor and so the individual RGB channels can be extracted from the final image to provide three individual colour frames.

What filters can I use?

Almost any optical filter but not clear. Tri-colour RGB filters used in colour cameras are also suitable. Below is a list for some of the standard filters the software will recognise. The filter names are in line with existing BAA standards:

During the image processing our software will try to interpret the name of your filter in the FITS header. If it fails to do this you will be presented with an error message. Please get in touch in this case and we ensure that the software will recognise your particular filter as well.

What format should I submit my images in?

All files should be uploaded to the HOYS server in FITS format.

It can be useful – though not essential – to name your files using the target number and name, exposure time and filter used. For example

Within the FITS header you should store the following information:

Again this is not essential as you will be asked for this during processing but it is helpful to speed up and automate the processing.

What image processing should I do?

Individual frames should be calibrated using darks, bias (offset) and flat frames as you would for normal astro-imaging. The images should not be enhanced or normalised in any way otherwise they will be of no scientific value. Extract the individual RGB colour channels for colour cameras. You should then stack the calibrated images for each colour / filter to reach fainter stars and upload them to the HOYS server.

What processing is required after uploading my images?

Watch the following video, follow the instructions on the HOYS HOW TO page or read the PDF MANUAL » to see how this works. There are 4 basic steps:

What software should I use to process my images?

Any standard image processing software you use for astro-imaging that can calibrate and stack frames is suitable. There are commercial as well as free versions. Here’s a list of some that should work well:

What telescope can I use?

Almost any telescope will work but as we are looking at stars down to magnitude 18, the bigger the better. Telescopes larger than say 150mm / 6″ are good. However, we do have useful data from telescopes as small as 50mm / 2″. These smaller scopes are particularly useful for measuring the brightness of the brighter stars, which get saturated easily when using bigger telescopes. Your mount should be accurate enough to track the stars to take exposures of several minutes without any trailing.

Why do I sometimes see HOYS-CAPS?

When the project started in 2014, the project was solely run from the University of Kent’s Centre for Astrophysics and Planetary Sciences (CAPS) hence HOYS-CAPS. But as the project has evolved it has grown much wider and hence the CAPS part of the name has been removed to better represent the new governing structure of the project.

Why do there appear to be two lightcurves in one? 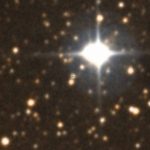 Sometimes a stars is so close to another bright star that the measurements from the brighter one influences the other. Here’s an example of where you can see that in the star 2MASS J21374376+5733169 in IC1396A. 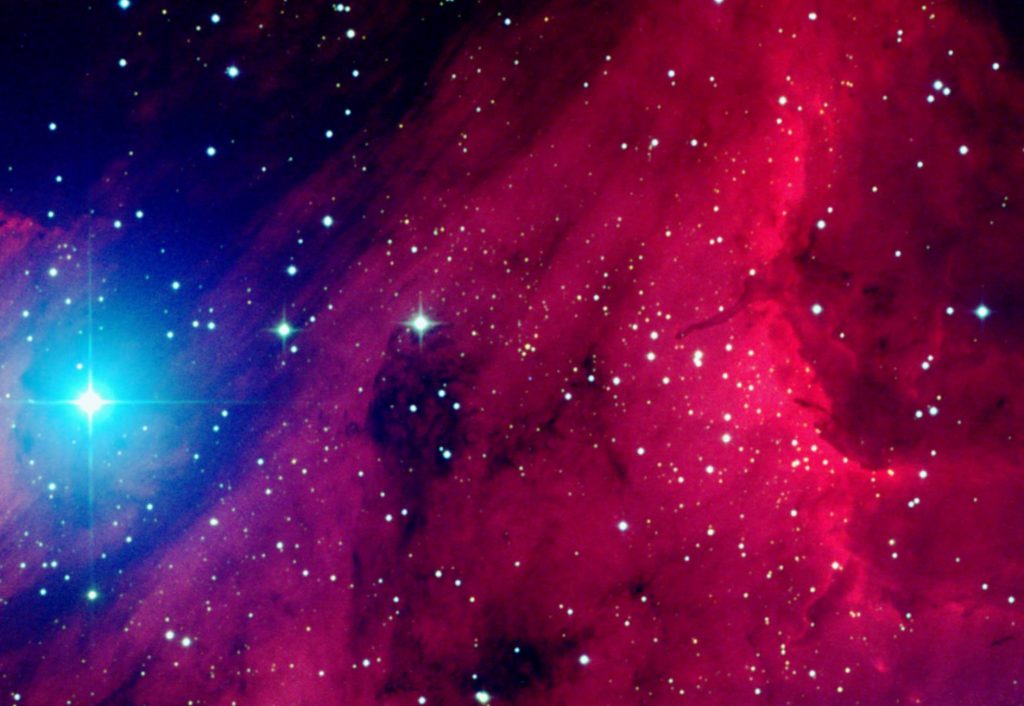 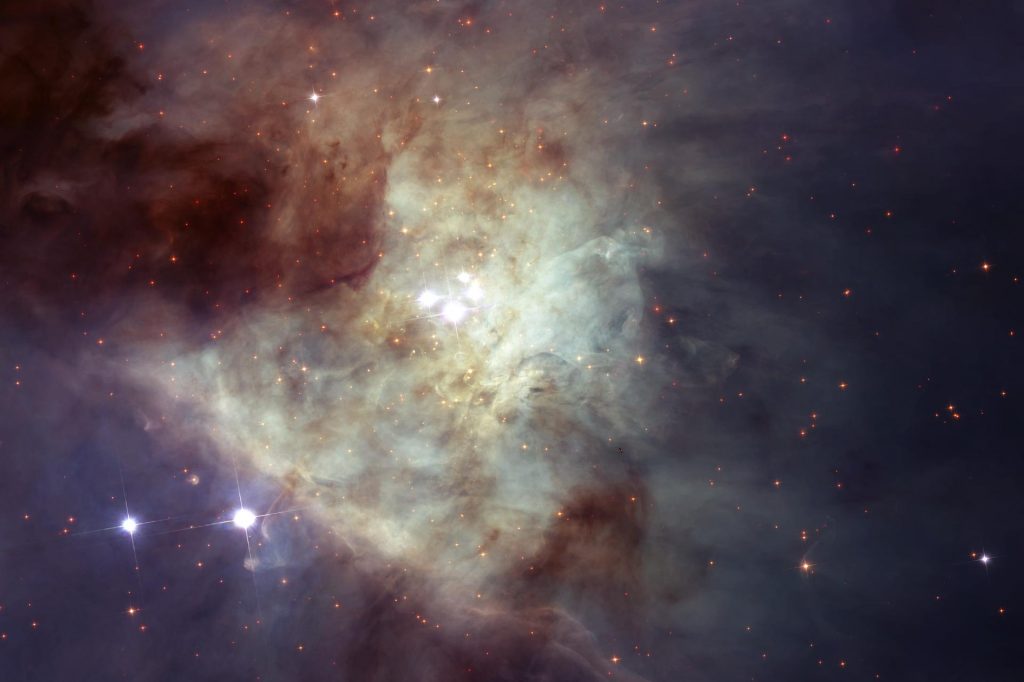