Our teacher training program HOYS-LCO2 is slowly coming to an end. This year 49 teachers from 11 countries signed up to learn how to observe with the LCO telescope network, the science of HOYS and doing some small research projects with our data. Like last year, we did run a picture competition. Participating teachers and their pupils were tasked to create colour images of HOYS targets taken with the 0.4m LCO telescope network either by themselves or other participants in the project. This was to be accompanied by a short descriptive text about the image.

It was good to see that many of the teachers encouraged their pupils to take part. We thus decided to have one teacher prize and three pupil prices. Each of them receives one hour of observing time at he 0.4m LCO telescope network to observe anything they like. We hope to report on the results of these at a later stage. Well done everyone! Congratulations!

Caption: Image of the centre of the Rosetta Nebula (NGC2244).  This was the 3rd image I processed as part of the HOYS training programme. I chose this target because I was interested in the creative process that takes place as the stellar wind of young stars clears their environment. I chose to emphasise the brighter stars in the image so that they looked more powerful, with green beams stretching upwards and red halos surrounding brilliant white centres. 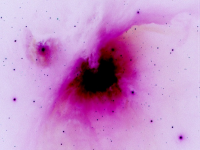 Caption: TOP: This image is the Orion Nebula (M42), using various stacked images and colours I created the image, inverting the colours to create the final image. The image concept was inspired by the recent MeerKat Radio images of our galaxy (the Milky Way) that show the filaments of our galaxy in greater detail as well as Sagittarius A at the centre. The image looks slightly sinister with the dark purple against the white showing up any gaseous particles and stars that could be missed on a darker background. The red-base for the colours creates a more impactful image and turns a nebula, somewhere where light is normally born in the form of stars to somewhere that is dark and sombre, almost like a graveyard. Overall the image is made to show a darker version of our universe by inverting the expected. Bottom: This image is the Orion Nebula (M42). For this image I used the basic filters with a slight blue-red tinge, toning down the green to create a more colour bent image. The focus on this image was to create dynamic light and dark areas to give great contrast to the filaments of gas that cut across the top of the nebula. This also adds depth to the image with the filaments of gas drawing you into the centre of the nebula. The red and blue stacked images mix well to create purples that fade into the nebulosity’s and show more depth and colour in the image. Overall the image is made to show a relatively accurate image of the Orion Nebula whilst adding a bit of spice to create an image that is visually appealing as well as accurate. 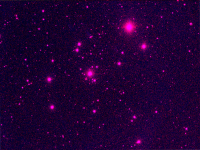 Caption: This image is of the rosette nebula, one reason that I really enjoy this image is the vast number of stars that can be seen within it. This image really shows just how vast and unknown our universe is as this is only a tiny portion of the sky above yet there are still stars filling the image. Each star in this image might have its own planets and ecosystems, meaning in just this tiny part of the sky there is so many opportunities for life to grow, for new unseen worlds and environments, all kinds of unimaginable worlds lie out there. When I look at this image it shows me how limitless our universe is and how busy, chaotic yet magnificent it all is.

Caption: The Orion Nebula (also known as Messier 42, M42, or NGC 1976) is a diffuse nebula situated in the Milky Way, being south of Orion’s Belt in the constellation of Orion. It is one of the brightest nebulae and is visible to the naked eye in the night sky with apparent magnitude 4.0. It is 1,344 ± 20 light-years (412.1 ± 6.1 pc) away and is the closest region of massive star formation to Earth. The M42 nebula is estimated to be 24 light-years across (so its apparent size from Earth is approximately 1 degree). It has a mass of about 2,000 times that of the Sun.
The Orion Nebula is one of the most studied objects in the night sky and is among the most intensely studied celestial features.The nebula has revealed much about the process of how stars and planetary systems are formed from collapsing clouds of gas and dust. The Orion Nebula is an example of a stellar nursery where new stars are being born.
Stars form when clumps of hydrogen and other gases in an H II region contract under their own gravity. As the gas collapses, the central clump grows stronger and the gas heats to extreme temperatures by converting gravitational potential energy to thermal energy. If the temperature gets high enough, nuclear fusion will ignite and form a protostar. The protostar is ‘born’ when it begins to emit enough radiative energy to balance out its gravity and halt gravitational collapse.
Typically, a cloud of material remains a substantial distance from the star before the fusion reaction ignites. This remnant cloud is the protostar’s protoplanetary disk, where planets may form. Recent infrared observations show that dust grains in these protoplanetary disks are growing, beginning on the path towards forming planetesimals.
Interstellar clouds like the Orion Nebula are found throughout galaxies such as the Milky Way. They begin as gravitationally bound blobs of cold, neutral hydrogen, intermixed with traces of other elements. The cloud can contain hundreds of thousands of solar masses and extend for hundreds of light years. The tiny force of gravity that could compel the cloud to collapse is counterbalanced by the very faint pressure of the gas in the cloud.
Whether due to collisions with a spiral arm, or through the shock wave emitted from supernovae, the atoms are precipitated into heavier molecules and the result is a molecular cloud. This presages the formation of stars within the cloud, usually thought to be within a period of 10–30 million years, as regions collapse into disks. The disk concentrates at the core to form a star, which may be surrounded by a protoplanetary disk. This is the current stage of evolution of the nebula, with additional stars still forming from the collapsing molecular cloud. The youngest and brightest stars we now see in the Orion Nebula are thought to be less than 300,000 years old, and the brightest may be only 10,000 years in age.
Within about 100,000 years, most of the gas and dust will be ejected. The remains will form a young open cluster, a cluster of bright, young stars surrounded by wispy filaments from the former cloud.